For your security, you are about to be logged out 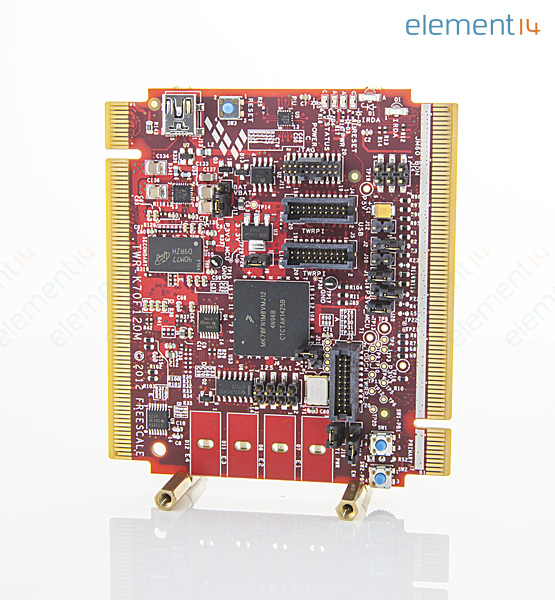 Want to see similar products? Simply select your required attributes below and hit the button ×

The TWR-K70F120M is a tower system module for Kinetis MK70FN1M0VMJ12 Microcontroller. The Kinetis K70 microcontroller includes a single precision floating point unit, Graphic LCD controller, IEEE 1588 Ethernet, full and high speed USB 2.0 on the go with device charge detect, hardware encryption, tamper detection capabilities and a NAND flash controller. The TWR-K70F120M module is a development board for the K61 and K70 family 32bit ARM Cortex-M4 microcontroller. The module is populated with a device rated for 120MHz operation across the full -40C to 85C temperature range. At room temperatures the board can be over clocked to 150MHz to allow for evaluation of the K70 and K61 devices that are rated for 150MHz operation across the full temperature range. The TWR-K70F120M operates as a standalone debug tool and can also be combined and used as part of the modular tower system development platform.

You can reserve stock now just order your desired quantity and checkout as normal. The quantity that cant be dispatched now will be placed on back order and sent as soon as we get a delivery from our supplier. You only get charged when the products are dispatched to you.

Enter Your Part No/Line Note
Add your own part number/reference to each product. This number will be added to the Order Confirmation, Invoice, Dispatch note, Web confirmation Email and Product Label
Lines note are comments you can add to each line of your order. Your line note will appear next to that product in your Order Confirmation, Invoice and Dispatch note. Your line note will last for the lifetime of the order only.
Add to Favourites

Country in which last significant manufacturing process was carried out

Like to see information about this product from other customers?

Post a question to one of our experts or start a discussion and get responses from supplier experts and fellow engineers in our community.
Filter Tool
Close

You can only compare up to four products at a time.

Please un-tick some of the selected items to continue.