Please note: you already have a quotation in your basket related to another account. You may only checkout a basket for a single account at any one time. Should you require a new quote for a different account please contact our sales team on [INSERT TEL OR EMAIL]

You have a quotation in your basket related to a different account than the items you are now trying to add.Please complete the purchase (or remove the quote – don't worry it's still available in My Account) before adding these additional items.If you continue, your current basket will be overwritten.

Your quotation can only be purchased against the specific associated billing account.Items in your basket are related to a different account. Please save the current basket or complete the purchase before adding these additional quote items.If you continue, your current basket will be overwritten.

Product may not be an exact match for your search

You previously purchased this product. View in Order History 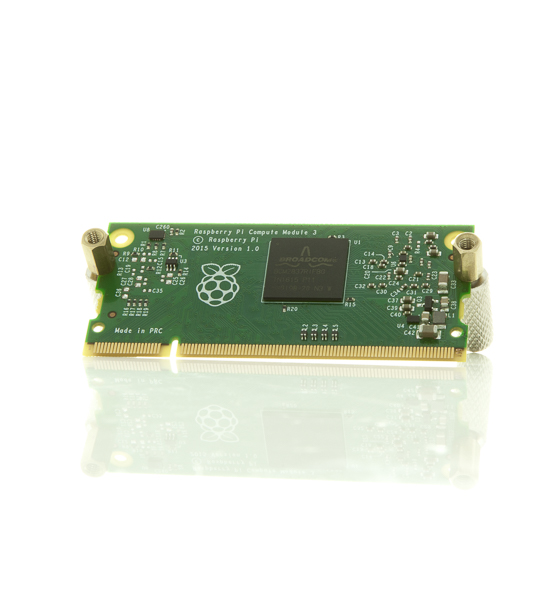 See all from this product range

Want to see similar products? Simply select your required attributes below and hit the button ×

CAD Models - Notice
CAD Models and drawings are provided to you on a revocable limited licence for your internal use only but remain the property of the manufacturer who retain all intellectual property rights and ownership. They are provided to assist you in decision making and as design guide but are not guaranteed to be error free, accurate or up to date and is not intended to be taken as advice.
Use of these CAD models and other options provided are downloaded and used entirely at your own risk and by continuing you confirm acceptance of the above.

Raspberry Pi Compute Module 3 Lite (CM3L) is DDR2-SODIMM mechanically compatible system on modules (SoMs) containing processor, memory, eMMC Flash (for CM1 and CM3) and supporting power circuitry. This module allows a designer to leverage the Raspberry Pi hardware and software stack in their own custom systems and form factors. In addition this module has extra IO interfaces over and above what is available on the Raspberry Pi model A/B boards opening up more options for the designer. CM3L product is the same as CM3 except the eMMC flash is not fitted and the SD/eMMC interface pins are available for the user to connect their own SD/eMMC device. The BCM2837 processor is an evolution of the BCM2835 processor. The only real differences are that the BCM2837 can address more RAM (up to 1Gbyte) and the ARM CPU complex has been upgraded from a single core ARM11 in BCM2835 to a Quad core Cortex A53 with dedicated 512Kbyte L2 cache in BCM2837.

Market demand for this product has caused an extension in leadtimes. Delivery dates may fluctuate. Product exempt from discounts.
X

Available for back order

You can reserve stock now just order your desired quantity and checkout as normal. The quantity that cant be dispatched now will be placed on back order and sent as soon as we get a delivery from our supplier. You only get charged when the products are dispatched to you.

Notify me when back in stock

Enter Your Part No/Line Note
Add your own part number/reference to each product. This number will be added to the Order Confirmation, Invoice, Dispatch note, Web confirmation Email and Product Label
Lines note are comments you can add to each line of your order. Your line note will appear next to that product in your Order Confirmation, Invoice and Dispatch note. Your line note will last for the lifetime of the order only.
Add to Favourites
Total Price:
Total Price: ( )
Total Price: --